Originally, I was supposed to attend this game with my aunt Lori and daughter Sarah, but through unforeseen circumstances (rain/car issues) my aunt had to back out. We will instead go to the Fri. 9/18 game vs. the Angels.

So, the next plan was for just Sarah and I to go, then on Saturday morning, my friend Dirk decided to go with us. The next course of action was to see what the weather would do. It had been raining constantly since late Thursday night, moving Friday night’s game to a Sunday doubleheader, so we wrote off BP early in the day.

At around 3:00 or so that afternoon, we came up with a plan of action. We would leave at 6:00 and get to the ballpark at around 6:30, at which time we would decide if we would purchase tickets or turn around and go to Cabela’s. When we arrived at the ballpark, the rain had let up substantially, so we purchased some cheap tickets and made our way inside, after we received our free salsa bowls….

….”because people like to say salsa!”. (That’s a Seinfeld reference for those of you that may not know)

When we walked in through the homeplate gate, I went to the closest tunnel to take a photo of the field….

If you look at the video board on the upper right of the picture, you’ll see some text in gold. It says — #38 Ron Washington, Manager. They had just announced the starting lineups for both teams. Cool, we’re gonna have baseball after all!

This was the view to my left….

Oh my goodness! We had bought bleacher seats but had no intentions of sitting in them. Tonight was going to be all about the foul ball, and it was looking really good!

It was still about 15-20 minutes before first pitch, so we went to get food. While we were eating, I made my way over to a booth that was selling game-used items and took the following photo….

Don’t ask me why I took that, just felt like it I guess. I also took this one of the concourse…. 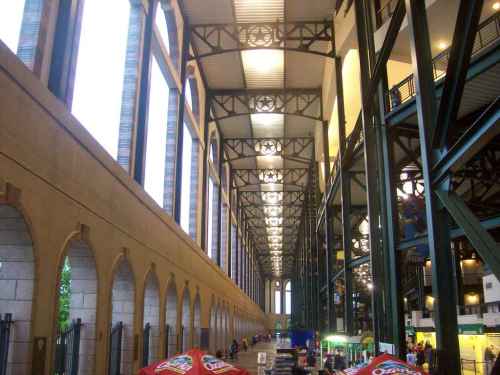 I love how that looks!

Once the game started we found some empty seats on the third base side. Section 14, row 28ish on the aisle. That has slowly become our favorite foul ball spot.

Here’s what our view of the action was like….

Sorry, that’s the best I can get my camera to zoom. Can’t tell who’s at the plate? Let me help you out….

Future Hall of Famer Ken Griffey, Jr. I didn’t realize how old he is. Do you think he still goes by his old nickname “The Kid”? I wonder.

I don’t care what team he plays for, that guy is a stud. Plain and simple.

From a foul ball standpoint, the beginning of this game was kind of weird. There were foul balls hit the first few innings, but they were rolling grounders down the base lines. The first foul hit into the stands wasn’t until the third or fourth inning, and it went into the second level.

We started to get some fouls in our general direction in around the fifth inning, but all of those were a section or two over in either direction.

After the end of the fifth, we decided to go for ice cream. I had noticed a specific helmet before the game that I knew I wanted to get my hands on. You’ll see it on the right in the following picture….

If you’re wondering the importance of that helmet, it’s mainly because from what “The Ice Cream Helmet King” tells me, Baltimore doesn’t even offer ice cream helmets. So, it’s been somewhat of a mission to find one, and ta-da! Mission accomplished. Take that Todd!

By the time the game reached the 6th inning, we were officially wet. It had lightly/not-so lightly misted the entire game, but around the 6th it turned into light rain.

In the eighth inning we moved behind homeplate and this was our view….

See, I told you it was raining.

And just in case you need more proof, look at this photo of Sarah as we were leaving….

Yes, she was wearing a coat in the seats.

We had some closer foul ball action back there, but they were still a section over.

In the bottom of the ninth, the Rangers were down 8-3 and they got the first two batters on base, but the rain came down harder, and Don Wakamatsu, the Mariners’ manager, came out of the dugout to complain about the playing conditions. Within five minutes the game was called. Who knows what might have happened?!

Here’s one more picture I took before we got in the truck to leave….

My Friends in the Blogoshpere